Welcome to Deltaville, Boating Capital of the Chesapeake.

Whether or not this small town between Virginia’s Rappahannock and Piankatank Rivers is, as the sign suggests, the boating capital of the entire Chesapeake is a question I will leave to Marylanders in Annapolis and Rock Hall.

For my part, I was content to forego considering the question in favor of getting somewhat familiar with the place to which we repaired nearly two weeks ago to work out Meander’s latest and greatest kinks.

Deltaville is neither a big place nor a dense one.  It appears to automobile-bound landlubbers as a modest collection of churches, businesses, and residences strung out along Route 33, the General Puller Highway, just west of the end of Virginia’s Middle Peninsula at Stingray Point. You’d miss it if you were driving too fast, although you would risk ending up in the bay if you didn’t put the brakes on soon after hitting County Road 662. 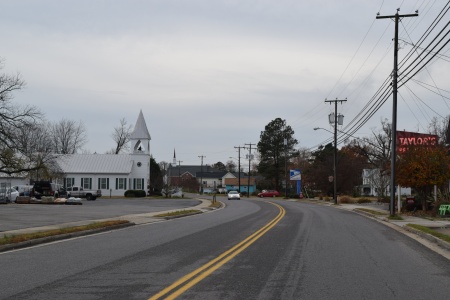 But if you pay attention to the business signs that adorn the road forming Deltaville’s backbone, you’ll soon see that every fourth or fifth one testifies to the importance this small town has for the Chesapeake Bay boating community.

There are places for people who own boats, or want to. 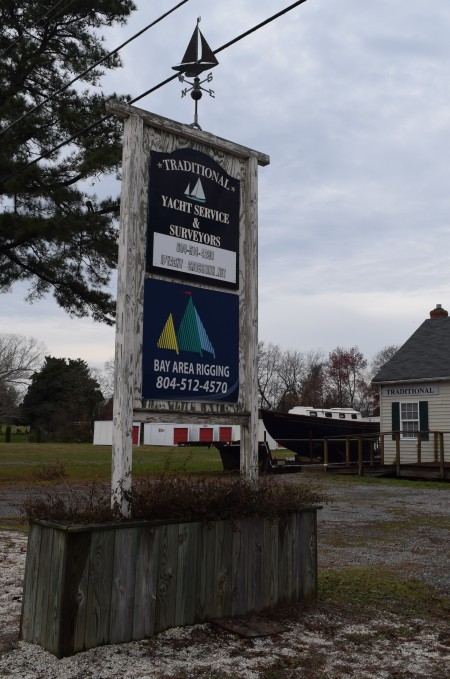 And places to help the people outfit the boats they own. 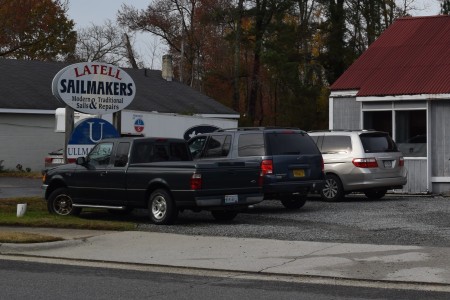 (Bay Canvas and Waterside Graphics, incidentally, went right to the top of Pam’s and Honey’s running list of Deltaville favorites. I wonder why.) 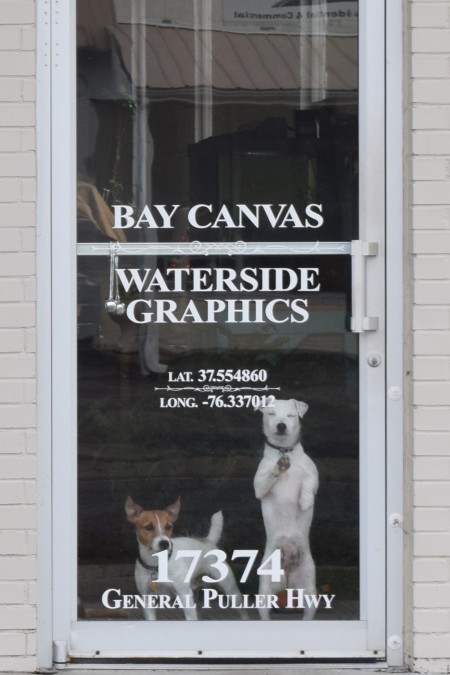 And places to help build the places at which the people can dock their boats.

And, finally, places at which the people can acquire joyful clutter with which to fill their boats.

Let’s take a closer look at that last sign. 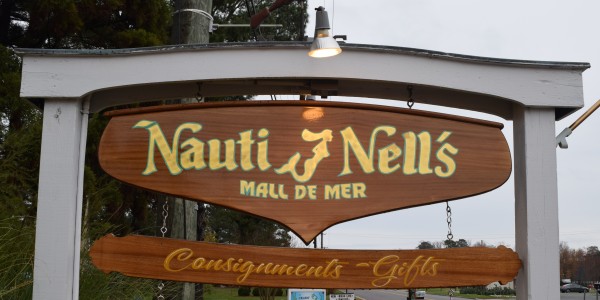 I don’t know what to think about folks whose cheerful perversity could move them to promote their ocean-themed business with a pun on the French phrase for “seasickness.” But I know I’d like to meet them.

So these are the hints about the place that the place itself offers to those who constrain themselves to the road. But its motive force, as with all places that thrive on the water, is off the road and at the water’s edge.

It’s at the water’s edge that you will find the places where the people can dock their boats. . . 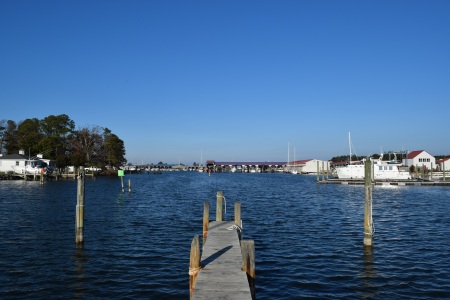 . . . and, finally, the people themselves. People like Mike and Mark, who last Saturday landed this big rockfish Mark is holding. . .

So this is Deltaville. What the people of this little town do on the land, they do in support of what people do on the water.

People like Mike and Mark, who clearly know what they’re doing.

And people like me, who just as clearly don’t.

So if the Southern Chesapeake should find you in a boat on the water that sorely needs support, Deltaville is a wondeful place to land.

One of the benefits of cruising, we told ourselves as we prepared to leave “everything we knew” to pursue it, is that it would bring us across things that “everything we knew” left little room in our lives to see. Our travels, we imagined, would bring us many little suddenly-you’re-there! moments to reward the grueling effort we would have to put into this effortless lifestyle.

And so has the lifestyle, now a month old, chosen to reward me this past weekend with the Choptank Heritage Skipjack Race, held right here in our current home port of Cambridge, MD.

The skipjack plays an important part in Chesapeake Bay maritime tradition. Developed especially for use by watermen to dredge the Chesapeake’s once highly productive oyster beds, the boat’s place in the Bay’s identity was officially acknowledged in 1985 through its designation as the state boat of Maryland.

But the Chesapeake oyster harvest, which reached its peak in the late nineteenth century, fell steadily through the twentieth. And, reflecting the declines in the oyster stocks for which they were designed, the boats that once plied the Bay in thousands today number about forty. 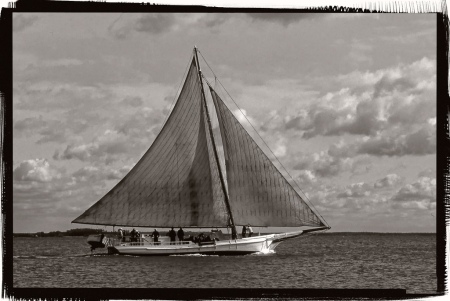 Not willing to let the skipjack’s history and culture slide completely beneath the waves, volunteers of the nonprofit Dorchester Skipjack Committee in Maryland’s Dorchester County got together in 1992 to commission and build the Nathan of Dorchester. Today, the committee continues to sail Nathan from her berth on the Choptank River at Cambridge to ports throughout the Chesapeake Bay to publicize the region’s maritime history and to educate people about the waterman’s way of life.

Held annually since 1997, the Choptank Heritage Skipjack Race is one of the Committee’s premier events.  Take it from me, this is absolutely and positively the only continuing skipjack race to be found anywhere at all in the entire length and breadth of the Chesapeake Bay.

Of course, if you’re a member of the Deal Island – Chance Lions Club, you’d know better than to take it from me. This past Labor Day, while we were getting Meander ready for our first trip from Fairport, VA, these folks were running their own annual Skipjack Race and Festival for the fifty-sixth time. Ah, well, maybe next year.

Anyway, each skipjack participating in the Choptank Heritage Skipjack Race receives equal show-up money, making it “a race for pride, not prize.” And the Nathan of Dorchester donates her show-up money back to the race fund to increase the other participants’ shares, one more way in which the Dorchester Skipjack Committee tries to keep its commitment to help these boats stay afloat.

Will o’ the wind

This year, the race’s twelve participating vessels had a lively but manageable wind of fifteen knots or so, with gusts to about twenty.

That’s not much by seafaring standards. But a willful wind is a democratic force that will happily make an idiot even of an accomplished sailor.

For instance, one spectator told us that last year’s race had a wind so light that one boat lost its steerage way. For a sailboat to steer effectively, water has to flow past its rudder at a certain minimum speed. No wind means no speed, which means no directional stability. So, left to the currents, she drifted down onto one of the viewing docks, and the spectators on it had to reach out to push her off again.

In a previous year, however, another skipjack crew encountered the opposite problem: winds and gusts strong enough to push a boat into the shoals and lay her down on her side.

And finally, this year, we watched as one entry got its headsail fouled halfway up shortly before the race began. Maybe it wasn’t the wind; maybe the halyard got jammed in a block at the top of the mast, or maybe some rookie on board made some unimaginable and irrecoverable error somewhere else. But the crew went off at the starting cannon still struggling with it, and never did get it completely up.

And in front of all these spectators, too.

There’s no schadenfreude here. I know our turn is coming soon enough. And when it does, I hope I have the wind to blame instead of myself.

The rest of the race? Went off without a hitch.

OK. I can only speculate that it went off without a hitch. Because we left it when it was about half over.

And I don’t feel guilty about it one bit.

According to a rule of thumb, a 50-foot-long displacement sailboat has a theoretical maximum speed of about 9 1/2 knots. That would be about 11 miles per hour for U.S. citizens, or less than 18 kilometers per hour for anyone from a place whose system of measurement postdates 1970.

So once that lineup of stately boats is off the starting line, watching them race is akin to watching grass grow.

And let’s face it: There are just some events for which a certain personal stake is almost a prerequisite for one’s involvement. Attending an elementary school play because your kid is in it comes quickly to mind.

Or, maybe, just enjoy the prolonged company of skipjacks while you’re waiting for your lawn to come in.

So did I really mean to suggest earlier that such an event could bring rewards to a borderline sociopath like me? I did, and I didn’t lie. At the Choptank Heritage Skipjack Race, three crossed my personal finish line. 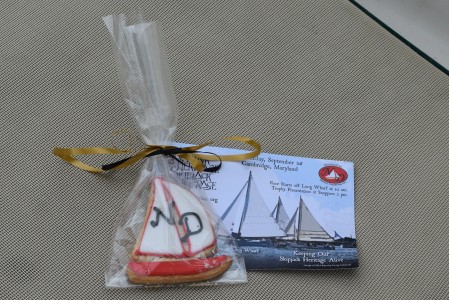 A dollar each. Knowing only one would make it home, we bought two.

In second place: The opportunity for humble reflection on the lengths to which a dedicated group of people will go to ensure that a crucial part of their culture is embraced, promoted and preserved.

Entry No. 39. Who knew something that works this hard can look this good?

Finally, in first place: These smiles. 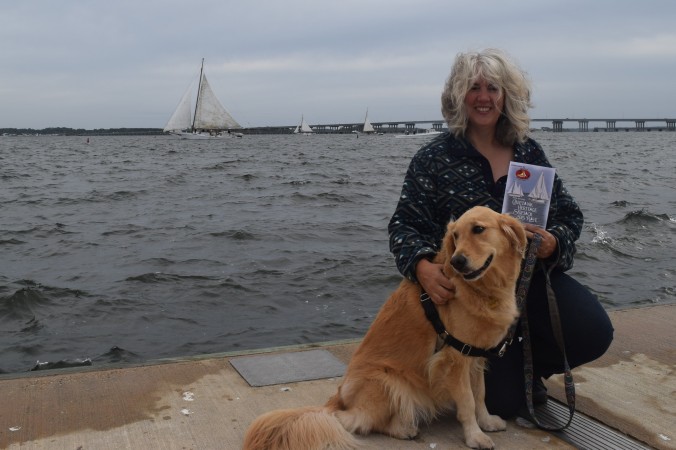 If someone were to cast them in an elementary school play, I’d be at every performance.

What more could anyone want from a suddenly-you’re-there moment?
________